It is pure anarchic genius-- a pleasant trip back to the later 1900s.

I love the descriptions of eternal San Francisco (Turk Street stays the same) and the poetry-loving girls in Berkeley, San Jose and such.

This is really funny stuff!

The musical intro to the show comes from Shirley and Company's "Shame, shame, shame."
Reviewer: JohnBrox - favoritefavoritefavoritefavoritefavorite - August 3, 2012
Subject: Review with question about opening music
I used to listen to this show all the time way back when. Being a big fan of the Firesign Theatre who's other members would float in to the show now and again. Frazer Smith was one of the funniest DJ's on the air back then. Between Michael C. Gwynne, Phil Austin and Frazer Smith and other various guests, both real, and fictional it was quite funny.
One thing I never knew is who does the opening music? Anybody out there know? If you do, can you tell me. eMail me at, jonbrox@sbcglobal.net
Reviewer: TimmyFromTucumcari - favoritefavoritefavoritefavoritefavorite - January 25, 2012
Subject: KROQ AM&FM ~ The Hollywood Nightshift
This is a good show, although not a typical Hollywood Nightshift show. There were usually 3 stars that hosted this show, which aired Sunday nights over KROQ/AM&FM (Pasadena, California), during 1977 & 1978. The missing man this night is Frazer Smith, (Stand-Up Comedian) who also had his own show on this station, during the week, playing free form Rock & Roll. The unique thing about this particular show, however, is that we hear more of Michael C. Gwynne (One time D.J. & actor) & Philip Austin (Of The Firesign Theatre). And, that aint bad. It was all improvised & off the cuff. 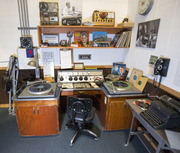